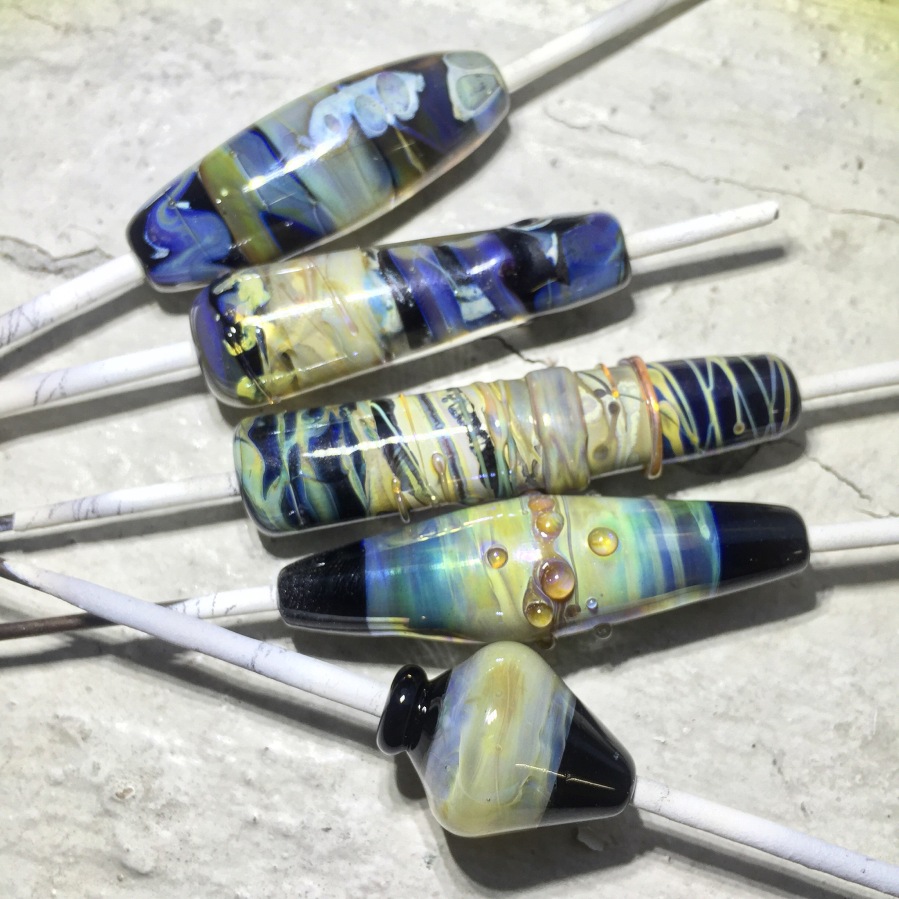 Oo.a is a beautiful pine green colour in the rod. My rod has white inclusion chunks (you can see them at the end of this rod in the picture). Its likely that your rods have inclusions in them as well. I plucked them out of the rod so they didn’t end up in my beads as I wasn’t sure if it was furnace grit or silver chunks. This rod was a pleasure to work with, no random breaking or pinging in the flame.
Oo.a is a very smooth and easy to melt glass, it stays a dark teal green until you’re ready to reduce. It reduced easily for a really pretty metallic rainbow effect. The more heat in the reduction stage, the bigger the colour range.
I tried to encase that reduction effect but that doesn’t really work with this glass. So, if you like that metallic lustre look you’ve got to keep it on the surface of the bead only. Edit: December 2016 Unfortunately you cannot trap that lustre effect under encasement or get an opalescent look from this glass. Its a reduction super lustre and that’s all it wants to be. After experimenting greatly with this glass over the year I can attest that surface decoration only is the best use of this particular colour, unless you’re going for organic effects under encasement.

Lets go back to what I was doing with the testing, I’m not really sure what was going on with my brain last year when I tested this colour (it was hot weather, lets blame that). I randomly decided that since I didn’t like the reaction I was getting over Hades (a Triton type deep blue effect) that I would just layer Oo.a over whatever came to hand.

Well… that sure was interesting.

Firstly, let me explain what happens with this colour over Hades. It goes blue, not even a really exciting bright blue, its just opaque blue, even less exciting than Triton. So I’m not going to focus on that for this section of the blog and because I wasn’t impressed with what I got I didn’t take any photos of the beads before giving them to my niece and nephew.

So, If you want the blue reaction, layer Oo.a over black (dark opaque glass), light reduce, then cool encase for a Tritonesque style blue reaction. Don’t encase if you want metallic blueish, greenish, greyish colours. You can see this effect at the bottom of the left hand bead just above the raised dot section.

The lustre Oo.a produces is extremely reflective, even if you don’t like these dark colours it’s still pretty spectacular. Edit: December 2016 I realised much later that the darker range of lustre colours is affected by the base colour and how much heat you gave Oo.a when reducing. I tend to reduce my beads quite far out and under the flame, but if you put Oo.a directly into the flame those initial dark lustre tones do lighten up quickly to lighter greens and blues. Oo.a  reacted with the same bluish opaque tones when used over anything dark really, including CiM Simply Berry, but it will lighten up considerably with a heavy handed reduction, particularly if there is a transparent or lighter coloured base.

If you want to know how I got the funky organic stuff in the photos above keep reading. If you want to see a photo of these lighter lustre colours scroll down to the end.

So, because I was in a mood and clearly heat affected by the hot summer sun. I pulled out a rod of ASK104 Mystic Grey (yes, original ASK from 2007). I layered Oo.a over the top of the ASK Mystic Grey and got a really pretty goldish-salmonish (very technical terms) reduction lustre (see the very top of the mostly green tapered bead in the photo above, right hand side bead). Then I decided that I would try and encase the lustre. So I used Effetre Clear and it turned well, very organic green. Motto of that story, light opaque grey colours turn Oo.a goldish salmonish, don’t encase it and your bead will look beautiful. Encase at your own peril.

Since I’d made a hash of the bead I thought I’d destroy it some more. So I tested with heat and I found that the hotter Oo.a got under the encasement the more yellow tones pulled through the green, until I ended up with a very organic looking mostly green bead. I dotted a few more dots and reduced and as you can see the dots have that sort of gold, leaning to pink lustre I was talking about in the paragraph above.  Much the same effect is going on in the lefthand bead except there is a layer of reduced Oo.a over clear glass which has produced a much more intense lustre effect that throws emerald green tints in the light, some fuming of the Effetre Ivory took place as well (which I like).

I thought, what the hell, lets try more organic stuff. I did something uncharacteristic and picked up a rod of Ivory and my Lauscha clear wondering if I would get a reaction between Lauscha and Oo.a like I did between Lauscha clear and Cx.a. Yep, same reaction but more intense, there is a distinct fumed yellow brown reaction line and as you can see this bead to the right the “clear” encasement actually looks really grey, not a nice effect, but it works for this particular bead. Oo.a over Ivory is very organic and wants to web out and do some funky reactive stuff. I encased in Lauscha clear, then I trailed Oo.a over this encasement and then encased with white hot Effetre clear over the top (no reduction) and whilst it’s hard to see in this bead, I got a purple-blue splotch of colour. So, Oo.a will turn a pinky purple to pale blue when sandwiched between layers of clear, where no reduction has taken place and the encasing glass is white hot and drippy.

Which brings me to the last test I did over a base of CiM Hades. I did two layers of encasing, lots of even heating and marvering and a reduction layer. This bead to the right shows all of those things. I’ll take you through this bead in sequence.

The base is a tube of CiM Hades over which is a thick splotch of Oo.a, which was reduced to a pretty metallic sheen. Then, because clearly I was in a mood I thought, thats not good enough. Encase all the things! So I encased it in Effetre clear. Then I got to thinking, alright lets really heat that encased layer to see what would happen. Everything under the encasement turned bright yellow, anything not encased went gross.

In order to hide the gross sections, I encased them then I swirled more Oo.a over the bead, reduced lightly and encased again in Effetre clear careful not to overheat the bead. I wasn’t really cooling the bead down but nothing was white hot either, so I would say the second layer was worked warm. I then encased this second layer. Looking at the lower half of this bead you can see how Oo.a looks when reduced and sandwiched between two layers of Effetre clear. I like the transitioning translucent green to sea green colouration in this bead. Interestingly, this was the ONLY layer to kiln strike a bit more. None of the other beads did, none of the other layers did. It could be where I placed the bead in the kiln.

The last thing I did was to wrap a spiral of Oo.a over the top end of the bead and reduced heavily. I forgot to smooth out the tube before adding this last wrap, when I reheated to smooth it all out I lost the original reduction. So I panicked and reduced it again. The second reduction (which is what you’re seeing on the bead) is darker and “muddier”. So it is possible to re-reduce after returning this glass into a neutral flame, but it won’t look as nice. I cursed myself for being silly and not marvering the bead smooth before the second reduction. So, I have a badly shaped bead. Oh well.

Garaging an encased layer of Oo.a will probably not transition it to yellow (to get yellow you really need to blast it with heat). However, a long hot garage time will turn layers sandwiched between clear more opaque pale sea green rather than blue-green translucent. I would make this style of bead last to preserve the translucent look as it is more appealing than opaque sea green.